Guest interview/giveaway at The Literary Ladies 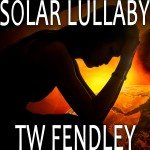 Thanks to Heidi Ruby Miller for her review of SOLAR LULLABY! I met Heidi via the Science Fiction Fantasy Saturday blog. Don’t miss her Ambasadora series if you’re a sci-fi adventure fan who likes strong female characters!

The idea of sentient communication through solar flares is an incredible idea, one I’ve not run into before in SF. And, the way Fendley once again deftly worked in her love of Meso-American cultures cements her unique mythos within the Science Fiction community. Great concept, engaging characterization!--Heidi Miller

And I appreciate these other inspiring reviews of the Kindle version and audiobook, narrated by Tiffany Williams. They make me want to write a sequel!

I thought the story was very good and interesting. can’t wait for another part. narration was excellent and would definitely recommend–Yaquelin, Miami, FL

The story wasn’t what I expected. It was better, original. I hope the author writes more because I want to know who/what this/these solar being/s are! This was such a tease. It ended way to fast but it was a short story and could of easily became a novel.

Well written, and the protagonist was easy to connect with.

The narration started a little mono-toned but quickly came to life. It was as if the narrator herself moved and became alive as the story did. At the very start I thought I wasnt going to like the narration but I quickly found my opinion change as the narrator improved.
Only bummer, I wish I could go get part 2, the complete story that lets us learn all about the sun being/s. Oh and what is it they are saying and why?
Over all, a fun short listen!!!–Amazon Customer, Broadhead, WI

Dr. Flare Haich works in an underground lab dubbed the Triple S for its unique design. It has been years since the Mayan Event destroyed a half billion people. She works on a project called the Empress which deals with electro magnetic pulse radiation. It is also worth mentioning that her parents were both dedicated researchers in this area, as well. In her father’s journal, he describes with great detail his findings concerning a sentient being….

“Red Alert” notifies the ones in the lab that a huge EMP is on its way! Sometimes it is extremely difficult to convince the higher-ups that an event will occur. Bureaucracy at its finest!

Love the ending of this one. Absolutely incredible. I also love a story that conveys so much meaning with few words.

Permanent link to this article: https://twfendley.com/heidi-miller-reviews-solar-lullaby/