Welcome to this week’s Blog Ring of Power guest, Ripley Patton, who lives in Portland, Oregon, with one cat, two teenagers, and a man who wants to live on a boat.

The third book in the series, GHOST HEART, will be released Summer 2014 and can currently be PRE-ORDERED through the GHOST HEART KICKSTARTER PROJECT (MAY 2014 only, so don’t delay).

Where do you get your story ideas? Most great story ideas come from stretching the reality we know into a reality we don’t. They come from asking the age old question, “What if?” For example, the main idea for the fictional birth defect in my PSS Chronicles Series came from the real medical phenomenon of phantom limbs. Amputees can often feel and sense the limbs they no longer have. They might feel grass between the toes of the foot they no longer have, or a cramp in a leg that has been removed. Even people born without limbs still experience phantom limb syndrome, as if their minds have an ethereal map of their body that goes beyond flesh. And so, when I began to think about that I asked myself, “What if those limbs still existed on some non-material plane? What would they look like, and act like, and what power would they hold? And how would society react to those that had them?”

Do you have a specific writing style? I think my writing style is growing and developing, and I hope it always will be. When I wrote short stories, I enjoyed playing with various styles. However, when I wrote GHOST HAND, the first novel in my series, my goal was to write a page-turner. I wanted a book that people just couldn’t put down between chapters and I’ve been told numerous times I achieved that. I also tend toward simple, to-the-point writing with lots of action and dialogue. I don’t go in for flowery descriptions or poetic narrative. And I actually try not to describe my characters physically too much because I want it to be more about who they are and what they do, rather than what color their hair or eyes are.

Are you a “plotter” or a “pantser” (do you plan/outline the story ahead of time or write “by the seat of your pants”) I am a complete pantser. Though I may have a vague idea of where I want the plot to start and end, it is what the characters and story do to surprise me, the writer, that keeps me writing. I write for the same reason I read, to find out what happens. I think if I outlined, I’d get bored. To me, being a pantser encapsulated the magic of writing, and I’ve learned to trust the dance between my subconscious and the wider universe of story we all tap into. This method hasn’t failed me yet. Everyone keeps telling me about the joys of outlining, but I don’t buy it. I know it works for many people, but not for me.

Do you use critique partners or beta readers? Why or why not? When I wrote short stories I always ran them through a critique group and it helped improve my writing immensely. Now that I write novels, I have a dedicated group of beta readers. Feedback is essential to the writing process, but a writer also has to know how to receive that feedback and process it without compromising the story just to please others. But yes, I think organized feedback is a must for any professional writer.

Is there anything you find particularly challenging to write? I find romance hard to write. Although my books aren’t romances and the emphasis is on the thrill and suspense, they do still contain romantic relationships. For me, it is a struggle to keep from going down the over-used, over-romanticized, cheesy road one sees in so many books. I like for the relationships in my novels to be realistic, not cheesy. But it can be a challenge to keep things real. Thankfully, I have two teenagers (my kids) who beta read all my books and help me keep things real.

Is your book in print, ebook or both? BOTH 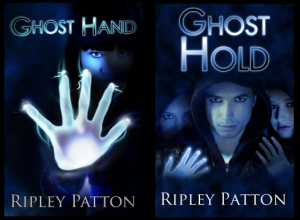 -old Olivia Black has a rare birth defect known as Psyche Sans Soma, or PSS. Instead of a right hand made of flesh and blood, she was born with a hand made of ethereal energy.

How does Olivia handle being the girl with the ghost hand? Well, she’s a little bit morbid and a whole lot snarky.

Her mother thinks her obsession with death, black clothing, and the local cemetery is a bid for attention. But when Marcus, the new guy in Olivia’s calculus class, stares at her like she’s a freak, Olivia doesn’t like it. And when her hand goes rogue, doing things she never imagined possible, Olivia finds herself running for her life with Marcus from a group of men bent on taking the power of her hand for their own nefarious purposes.

GHOST HOLD: Olivia Black is back.

Only this time she’s not the one in need of rescue.

Samantha James, rich, popular, and an award-winning composer at age seventeen, is the next target on the CAMFers’ list. In order to convince Samantha to come with them, Olivia and Passion must pose as cousins, blend into the most affluent high school in Indianapolis, and infiltrate a mysterious cult known as The Hold.

Olivia doesn’t expect it to be easy, even with the PSS guys backing them up. But what she discovers over the course of the mission will call into question everything she ever believed about herself, her family, and especially about Marcus, the guy she is undoubtedly falling in love with.

Permanent link to this article: https://twfendley.com/brop-interview-ripley-patton/