Welcome to MICHELLE HAUCK, this week’s Blog Ring of Power guest. Michelle lives in the bustling metropolis of Northern Indiana with her hubby and two teenagers. Two papillons help balance out the teenage drama. Besides working with special needs children by day, she writes all sorts of fantasy, giving her imagination free range. A book worm, she passes up the darker vices in favor of chocolate and looks for any excuse to reward herself. Bio finished? Time for a sweet snack. Her epic fantasy, Kindar’s Cure, is released from Divertir Publishing. A short story, Frost and Fog, will be released in a summer anthology from The Elephant’s Bookshelf Press.

What is your writing process? Do you follow a regular routine? Do you use pen and paper or computer? Work at home or at the library/Starbucks, etc. I don’t have a routine, except that I always write on my laptop at the kitchen table. Being in such a central location, I’ve really learned how to tune things out and concentrate. I also always have music going. But as far as writing everyday or having a set amount of words I want to produce, that doesn’t happen. I write very slowly and I have to imagine each chapter or scene in my head first.

How do you balance writing with other aspects of your life? It’s tough. I try to work on writing when my husband is not home so he won’t be totally ignored. Working with special needs kids at an elementary school means I have my summers off and can work during the day. I love summer.

When do you write? I like to write first thing in the morning whenever possible.

How much time per day do you spend on your writing? Sometimes I spend all day when I’m not working my day job, otherwise three hours a day. Either I’m writing, revising, beta reading, or trying to network. I hope network isn’t a dirty work. To me it means making new friends and helping out other writers.

What has been the most surprising reaction to something you’ve written? I was a little surprised that some readers preferred one of my villains over the love-interest hero. I guess I made that villain pretty sympathetic.

What is the strongest criticism you’ve ever received as an author? The best compliment? I was told my writing was too cliché. You know, I’m not sure that is a bad thing. Cliché is comfortable. Look at popular TV and movies, people like it. If you don’t have some level of cliché stories wouldn’t be understandable. Plus, you can always seem like you’re headed for cliché, then turn it on its ear.

Other than your family, what has been your greatest source of support? That’s easy: Agent Query Connect has been like a second family to me. I get all the support I need there and advise any writer to check it out.

How do you deal with rejection and/or negative reviews? I dose myself with lots of chocolate and listen to music that has a lot of intensity. Rejection seems to have the opposite effect on me. Instead of being discouraged, it makes me more determined to find a home for my scribbling.

What format is your book(s) available in (print, e-book, audio book, etc.)? paperback and e-book 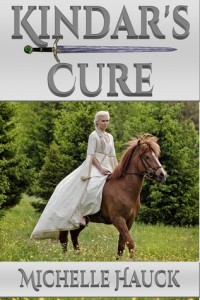 KINDAR’S CURE: Princess Kindar of Anost dreams of playing the hero and succeeding to her mother’s throne. But dreams are for fools. Reality involves two healthy sisters and a wasting disease of suffocating cough that’s killing her by inches. When her elder sister is murdered, the blame falls on Kindar, putting her head on the chopping block.

A novice wizard, Maladonis Bin, approaches with a vision—a cure in a barren land of volcanic fumes. As choices go, a charming bootlicker that trips over his own feet isn’t the best option, but beggars can’t be choosers. As Mal urges her toward a cure that will prove his visions, suddenly, an ally turns traitor, delivering Kindar to a rebel army, who have their own plans for a sickly princess.

With the killer poised to strike again, the rebels bearing down, and the country falling apart, she must weigh her personal hunt for a cure against saving her people.

Permanent link to this article: https://twfendley.com/brop-interview-michelle-hauck/