Welcome to this week’s Blog Ring of Power guest, BONNIE MILANI, who has taken what might be called the sandwich approach to writing. She started writing early, winning state-wide writing contests in grammar school, publishing an environmental fairy tale under the aegis of the NJ Board of Education in college. After earning her M.A. in Communication at Stanford, Bonnie freelanced feature articles for East Coast newspapers and regional magazines, from Mankind and Peninsula to Science Digest as well as how to articles for the late & much lamented fanzine Speculations. She stopped writing completely after marriage while building a pair of businesses with her husband. It was only with the successive deaths of each member of her family that she reclaimed her love of story-telling. Home World is the result.

Today, Bonnie lives with her husband of thirty-six years in Los Angeles. She is still a full-time benefits broker, specializing in employee benefits for entrepreneurs and micro-businesses.

Home World will launch later this month, but in the meantime, you can find Bonnie on Facebook.

PART ONE:  ABOUT YOU

How long have you been writing? Let’s not admit to just how many years that’s been. ‘Nuff said that I can’t remember NOT telling stories.  I used to script the games of tag we played with other kids in the neighborhood.  In addition to introducing me to the thrill of active audience participation, it also taught me the importance of keeping the audience satisfied – especially when most of them were bigger than me & chasing me down!

When did you first consider yourself a professional writer? I was writing for publication – statewide school contests, etc – by the time I was in 7th grade.  I scripted & conducted TV interviews for my college TV station, and wrote the text for an environmental fairy tale published by the State of NJ as part of its grade school curriculum.  After I finished my M.A. in Communications at Stanford, I freelanced articles for a variety of East Coast newspapers and various regional magazines.  I even wrote a cover story for Science Digest!

What books have most influenced your life? Now this is a fun one.  I’d say the two stories that influenced me the most were the ones that literally shaped my life.  The first was the book that made me realize I was supposed to be a writer:   I remember The Moment very clearly.  I was about 7 years old at the time.  It was a Sunday afternoon & I was lying on my grandmother’s living room couch reading a kid-level biography of William Harvey, the English physician credited in the West for discovering how blood circulates in the human body.  About a third of the way through the book I announced to no one in particular, ‘I could write better than that!’  My grandmother heard me, & promptly challenged me to prove it.  So I penciled in an edit of the book.  Unfortunately for my own body’s well-being, neither my mother nor the local librarian appreciated my efforts.

The second story to shape my life was the one that got me into writing science fiction.   After all these years, I haven’t a clue what the story title was, but it was, I believe, in Asimov’s Science Fiction magazine.  The story’s premise was that the only possible function women could serve on a space ship crew were as ship prostitutes (obviously phrased more delicately at the time).   Made me so angry I threw the magazine across the room, wrote a letter of outraged protest to the editor, and cancelled my subscription.  In retrospect, I should’ve been more circumspect, but I was hot-headed little thing at 10 years old.  The long-term fall-out of that story, though, was that it launched me into the junior ranks of women’s lib and sealed my determination to write sci fi for WOMEN.

What genre do you write? Two guesses…

What is your favorite theme/genre to write about? Genre, not surprisingly, is sci fi.  Theme…family.  Growing up, finding love – and losing it.  Like I said, my sci fi is WOMEN’s sci fi. 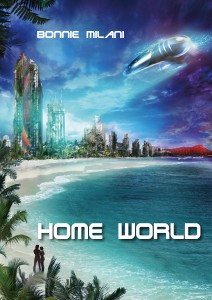 HOME WORLD: Amid the ruins of a post-apocalyptic Waikiki, Jezekiah Van Buren thinks he’s found a way to restore Earth – Home World to the other worlds of the human Commonwealth – to her lost glory.

Ingenious even by the standards of the genetically enhanced Great Family Van Buren, Jezekiah has achieved the impossible: he has arranged a treaty that will convert Earth’s ancient enemies, the Lupans, to her most powerful allies. Not only will the treaty terms make Earth rich again, it will let him escape the Ring that condemns him to be Earth’s next ruler. Best of all, the treaty leaves him free to marry Keiko Yakamoto, the Samuari-trained woman he loves. Everything’s set. All Jezekiah has to do is convince his xenophobic sister to accept the Lupan’s alpha warlord in marriage. Before, that is, the assassin she’s put on his tail succeeds in killing him. Or the interstellar crime ring called Ho Tong succeed in raising another rebellion. Or before his ruling relatives on competing worlds manage to execute him for treason.

But Jezekiah was bred for politics and trained to rule. He’s got it all under control. Until his Lupan warlord-partner reaches Earth. And suddenly these two most powerful men find themselves in love with the same woman. A woman who just may be the most deadly assassin of them all.

Permanent link to this article: https://twfendley.com/brop-interview-bonnie-milani/