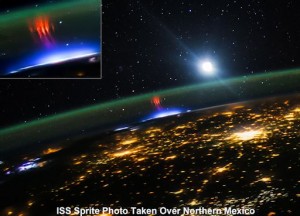 Reprinted from Space Weather News: http://spaceweather.com This month, astronauts onboard the International Space Station have witnessed exotic forms of lightning that reach up from thunderclouds near Earth’s surface all the way to the edge of space.  Their photographs of “sprites” and “trolls” dancing over Mexico are a must-see.  These forms can been seen from Earth’s surface, …

END_OF_DOCUMENT_TOKEN_TO_BE_REPLACED

Permanent link to this article: https://twfendley.com/sprites-trolls-dance-above-clouds/ 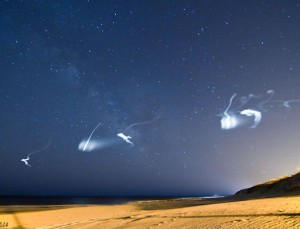 This morning before sunrise, sky watchers along the eastern seaboard of the United States witnessed an amazing sky show created by the rapid-fire launch of five rockets from NASA’s Wallops Flight Facility.  It was an experiment named “ATREX”  to study turbulent winds in the transition zone between Earth’s atmosphere and space. Eye-witness accounts and photos …

END_OF_DOCUMENT_TOKEN_TO_BE_REPLACED

Permanent link to this article: https://twfendley.com/nasa-creates-sky-show-with-rapid-fire-launch/