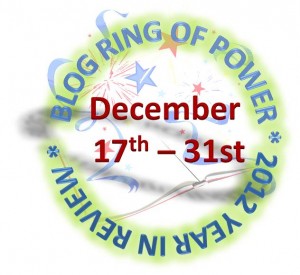 As 2012 comes to a close, we wanted to take a moment to reflect on some of the joys and triumphs of the year. To that end, we bring you the 2012 Blog Ring of Power Year in Review! We’ve teamed up with this past years’ BRoP interviewees to bring you eleven days worth of “year in review” guest posts and ten fabulous giveaway prizes! Each day we’ll share a new guest post on the year in review from a previous BRoP interviewee and you’ll have another opportunity to enter the giveaway—so get hopping! And be sure to enter the giveaway at the end of this post!

2012: A Year of Independent Publishing
2012 was a life-changing year for me, largely due to that string of covers at the top of this post. This is the year (actually starting in Nov. 2011) that I self-published my YA science fiction trilogy (plus novellas), and it has radically changed my ideas about how to succeed as an author.
First came Open Minds, the story of a future world where everyone reads minds, except one girl. Of course I hoped that people would enjoy the story, but I was frankly stunned by the response. People were excited about the book! Book bloggers enthusiastically accepted it for review, sales steadily climbed, and readers started telling me things like:
“Can’t wait to read the next book!”
“I couldn’t put down the first book of mindjack. Literally. I have a mountain of homework to do now but it was worth it. Write more pleaseeeeee. Thanks 😀“
I was already busy writing the sequel, Closed Hearts, but the reader response made that process even more exciting… and terrifying. Would they like the next book? Now readers had expectations – could I fulfill them? When I published Closed Hearts in May 2012, I’ll admit I was somewhat of a nervous wreck. But not only did readers enjoy the book, but that was when sales really took off. Open Minds was now regularly in the Top 100 Science Fiction books on Amazon, and notes like this started to pour in:
“I picked up Open Minds yesterday, read it straight through and then immediately bought Closed Hearts. They were both amazing and I can’t wait for the next one!”
Even before Closed Hearts was published, I had already started writing the third book in the Trilogy, Free Souls. But during the process of writing that book, I also wrote three novellas, which were independent Mindjack Origins stories, told from the viewpoint of secondary characters in the novels. It was a great way to flesh out some of my secondary characters, to provide bonus material for people enjoying the books, and to experiment with the short story form – something that’s really only viable now that ebooks are so readily available. I had fully embraced the indie revolution at this point, and wanted to see what cool things I could do with it. Readers seemed to like it too:
“Read both books, plus all companion novellas over the past two days. LOVE….the books and Julian.”
Along the way, I connected with award winning director Beth Spitalny, and together with an amazing cast and crew, we’ve made a live-action trailer for the Mindjack Trilogy. I flew to NYC for an incredible day on location for the shoot, and experience I will never forget. 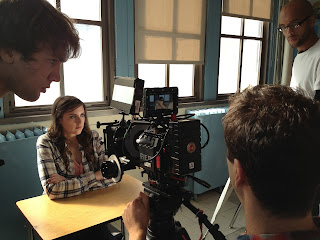 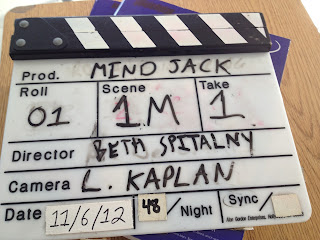 Soon (before Christmas), both the Mindjack Trailer and Free Souls will be released. I can honestly say that Free Souls is my favorite book of the series. I hope that readers will think so as well!
2013: A Year of Independent Writing

One thing that self-publishing has taught me is that there are no limits to what you can write. There’s an incredible freedom in being indie that allows you to write and publish anything your heart desires – the worst thing that will happen is that no one will read it (which is like a stab to the chest for any writer, but there’s always another story to write). In that spirit, I’ve decided to write exactly the stories that move me, and hope that they will move readers as well. Here are the projects on my production schedule for 2013:

Third Daughter – Steampunk Fantasy Romance – The technology is more retro and the romance more “steamy” than Mindjack, but this steampunk dalliance is my “for fun” novel, in between my more serious science fiction series (Mindjack and Singularity). Not that it’s comedic – there’s political intrigue, fights with swords, sinister dirigible weaponry, and a struggle for the hand of the Third Daughter of the Queen… and the fate of the world as she knows it. This novel should release sometime early 2013.

Singularity – Young Adult Science Fiction – The unnamed first novel of this multi-part series will revolve around a future world that is post-Singularity (the Singularity is the event horizon when computers become more intelligent than humans). I’ve plotted out the series, but won’t start writing until after the first of the year. I think this series will appeal to fans of the Mindjack novels, with plenty of cool technology and future world dreaming, all told through the viewpoint of a legacy human boy. [For a sneak peek at what this series will look like, I wrote a flash fiction piece for Christmas set in this world – see My Books tab on my blog.] The first Singularity novel will likely be released in the second half of 2013.

The Faery Swap – Middle Grade Fantasy – I love writing middle grade (ages 8-12), but since indie publishing isn’t amenable to MG, I’ll be querying this novel the old-fashioned way, once I revise it. It’s a Prince and the Pauper meets Artemis Fowl fantasy told from the alternating viewpoints of a human boy and the warrior faery who tricks him into swapping places. I hope to have this revised and off to query in the first half of 2013.

So much writing, so little time. But I couldn’t dream of a better problem to have.

Be sure to stop to check out each of the stops on the Year In Review – new chances to enter the giveaways each day!

Permanent link to this article: https://twfendley.com/brop-year-in-review-interview-4-susan-kaye-quinn/