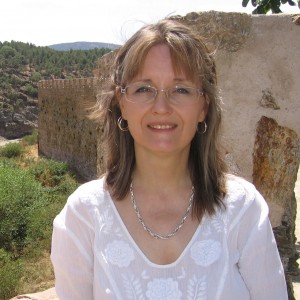 It’s time for another Blog Ring of Power interview!

Sue Burke lives and writes in Madrid. Originally from Milwaukee, Wis., much of her career was spent as a reporter and editor, covering everything from dog shows to politics to crime. She began writing fiction twenty years ago and has published short stories in various magazines and anthologies, as well as poetry and non-fiction. Her current project is a translation of the medieval fantasy story, Amadis of Gaul.

This is Part 2 of a five-part interview. Be sure to check out the other BRoP sites for the rest of the interview:

SUE: I work at my day job in the late afternoon and evening, so I write in the morning. I sit down at my desk after breakfast and get to work.

I work at a computer because I’ve spent so many years working at a keyboard that I’m completely comfortable with one. And I work at home because I don’t have time to schlep to a Starbucks (which exist in Madrid, by the way) or some other location. I’d also be away from my reference books and notes — 4,000+ pages of dictionaries and reference materials when I’m translating, and I don’t own a car thanks to Madrid’s excellent public transit system, so that’s a lot to schlep.

I’m always working on more than one project. Right now, I’m writing the sequel to a science fiction novel that comes out this year, along with shorter works, articles, and poems. One day a week, I work on the continuing translation of Amadis of Gaul.

Sue: Organization is key. I keep my papers orderly and my computer files neatly hierarchically arranged (and regularly backed up). I plan ahead, and I keep clear notes so that I can pick up a project and know where I left off and what to do next. That way I can write and do other things without feeling overwhelmed because I know where the whelm is and can sail the waters of life more securely.

A lot of people don’t like to plan, and I can understand that. It takes energy and discipline to plan because it can be so tempting to jump right into a project and get organized later. But I think being organized saves energy that would be spent finding lost items, figuring out where you were, or coping with avoidable crises. Planning makes life easier.

I think planning also helps prevent writer’s block, because what blocks you, down deep, is not knowing what to do next. If you have a path laid out, or an idea of what comes next, or an expectation of what you’ll be doing and when you’ll be doing it, then certain kinds of writer’s block simply don’t happen.

Sue: I still remember one rejection of a story as “evil” — but it was about vampires! Of course they’re evil. For a while, among some writing friends, I was known as “the evil Sue Burke.” And I sold the story to the very next place I sent it.

BRoP: Has living in Spain affected your writing?

Sue:  It’s helped me understand how different a culture can be, even one like Spain, which isn’t that odd compared to the US. This is a more conformist culture, even to the point that Spaniards don’t like to go shopping at off-peak hours because “people don’t that” and the stores are empty, which would make lone shoppers feel conspicuous.

Spaniards also don’t smile as much, especially if they’re working on a hard problem, because smiling would show that they aren’t taking the situation seriously — so if your Iberia Airline reservation is messed up, the grimmer the faces behind the customer service counter, the better the chance that a solution is being found.

I’ve set some stories in Spain, but I’ve found — as have writers in other countries writing from deep inside their cultures — that editors and readers don’t always believe that motivations or customs could be so different.

BRoP: Other than your family, what has been your greatest source of support?

Sue:  Other writers have always been there to help me in any way they could, including a lot of established, successful writers. And I’ve tried to help others to the best of my ability. “Pay forward,” they say: you can never repay the experienced writers who helped you, but you can help those who have less experience than you.

Sue: Both in paperback and Kindle. 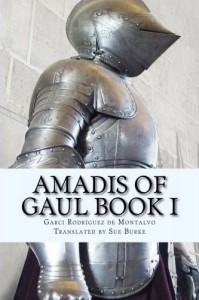 AMADIS OF GAUL: In medieval times, troubadours and poets recounted tales of knights-errant. They fought evildoers and magical beings, and each knight served his lady in accordance with the rules of chivalric love. Amadis of Gaul is the most famous tale of chivalry from Spain. The novel, divided into four books, recounts the life of Amadis, the greatest knight in the world. This is Book I of the novel. It became the Renaissance’s best-selling literary phenomena. It went through 19 reprintings, was translated into 7 languages, and spawned 44 direct sequels, as well as fueling an entire genre, complete with fan fiction. Jousts were revived with theatrical pageantry, and “knights” came in the guise of their favorite characters. This is a new translation. It leaves nothing out, will carry you back in time to enjoy this transcendent, delightful adventure. It includes a preface, introduction, notes to chapters, and an appendix discussing the relationship between Amadis of Gaul and Don Quixote. Amadis of Gaul is one of the pillars of European fiction. It opens a window not only to a wondrous fictional world but to the real medieval world that produced it.

Permanent link to this article: https://twfendley.com/brop-interview-sue-burke/