No fooling–JAGUAR HOPE free until 4/1! 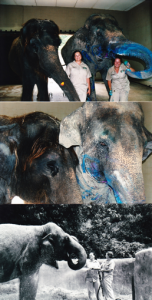 She also writes LGBT Upper YA Dark Urban Fantasy under the pen name J.T. Fairfield. The first book in the Bayou Zoo series was released on 10/22/12, CAGED IN MYTH.

When she’s not changing diapers or writing, she enjoys scuba diving and has been known to make an elephant do a headstand.

What is your writing process? Do you follow a regular routine? Do you use pen and paper or computer? Work at home or at the library/Starbucks, etc. I use Scrivener on my laptop. Honestly, Scrivener is the best tool in my writing arsenal. I write mostly from home but sometimes escape to Starbucks or the local coffee shop.

How do you balance writing with other aspects of your life? I have a spouse in the military who has been on assignment in another state for the last six months, two toddlers, a dog, two cats and one fish. To say my life is over-run by distractions is an understatement. I’m an insomniac and only sleep 4-5 hrs each night. It’s the only thing that allows me to read and write as much as I do.

How much time per day do you spend on your writing? Hmmm… Not as much time as I spend reading, but don’t tell my publishers! Ha!

Other than your family, what has been your greatest source of support? My critique partner, Cornelia Amiri.

How do you deal with rejection and/or negative reviews? First, I never respond. Responding to a query letter rejection or negative review is a major no-no. Getting into a battle with readers on Amazon or Goodreads is equal to having “Amateur” tattooed on your forehead. Negative reviews happen to everyone, even the incredibly successful. Know this, I still feel a bit like vomiting for the first twenty-four hours after reading a bad review for one of my books. 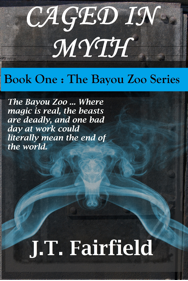 Caged in Myth by J.T. Fairfield

“I loved everything about this story, except that it had to end. Caged in Myth is a coming out story like no other. I would recommend you pick up this book, you won’t be disappointed!” -Squibley’s Fiction Addiction

*5 STAR REVIEW*
“I felt for Jay and his friends. The character development was sincere and intriguing.” -Linda Hays-Gibbs, Author of My Angel, My Light as Darkness Falls and Review for The Romance Reviews

CAGED IN MYTH: The Bayou Zoo, where magic is real, the beasts are deadly, and a bad day at work can literally mean the end of the world.

Octavian Julius McKellter— “Jay” to everyone who doesn’t want a punch in the face— struggles with keeping the secrets of his supernatural community and his own secret…he’s gay. Throw in a dose of danger, deceit, and Louisiana heat, and you’ll find yourself CAGED IN MYTH.

Permanent link to this article: https://twfendley.com/brop-interview-s-j-drum/