Today I’m thrilled to introduce you to Pauline Baird Jones–a friend I met through our publisher, L&L Dreamspell, and Broad Universe. This is the first stop in the Blog Ring of Power interviews. Don’t miss the rest of her interview:

Pauline Baird Jones began her writing career penning romantic suspense (fictional murder doesn’t get you strip searched!) but she had a secret longing to ramp up the spills, chills and daring do.  By chance she wrote a science fiction romance, realized she’d been mixing fiction into her science since high school (oops, sorry science teachers!), and thought, why not go where she hasn’t gone before? After that, it was easy to stir in some steampunk. The Key was the first in her Project Enterprise series, which will conclude with #6, Kicking Ashe.

BRoP: How long have you been writing?
Pauline: My dad used to tell us about their neighbor, who wed when he was 13. He’d tell my dad, “I’ve been married as long as I can recollect.” I feel a bit like that about my writing. I’ve been doing it as long as I can recollect. I did not, however, start writing for publication until the late 1980’s. I sold my first short story in 1988 and my first novel was contracted in 1998.
BRoP: Tell us about your early works—what was the first thing you ever wrote?
Pauline: The first thing I ever wrote was some fan fiction about a Georgette Heyer novel. I ran onto it when we moved to Houston and oh my. Yeah, it wasn’t pretty. LOL! It only took me a thousand years to get better.
BRoP: What books have most influenced your life?
Pauline: Georgette Heyer was obviously a huge influence. I learned about crafting character and humor from her. Also Alastair Maclean and Mary Stewart taught me about ramping this up with high energy adventure and action. Becoming a Writer by Dorothea Brande also impacted me. I found it in the library and it gave me the courage to learn the craft and press forward (this after finding a book that claimed if you weren’t a wonderful writer already, then you would never be anything but a hack).
BRoP: What genre do you write?
Pauline I presently write science fiction romance and steampunk romance, but I have wandered through many genres and indeed, I frequently mix more than one into a story. I started writing comedy romantic suspense, then mystery suspense and finally action adventure. I can’t seem to help it and couldn’t stop, even back in the 1990’s when it was the kiss of death for New York publication. I tell people I commit random acts of writing. I like doing it, even though it often makes me worry my head will explode.
BRoP: If you couldn’t be an author, what would your ideal career be?
Pauline: I’d sell chocolate. I’d need lots of it if I couldn’t write. And donuts. Yeah, I’d need donuts, too. So I’d open a chocolates and donut shop.

Pauline: Trade paperback, most digital formats. I have one book available in audio: THE KEY. 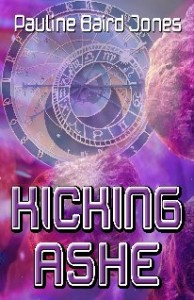 Pinterest: http://pinterest.com/perilouspauline/
With hearts and lives on the line, a kiss may be all they have time for…
Time has dumped Ashe on a dying planet and she needs to figure out why before she ceases to exist. Or gets vivisected by some Keltinarian scientists. Or worse.
Vidor Shan might help—since someone somewhere is trying to hose him, too—if she can convince him to trust her. Probably shouldn’t have told him that only someone he trusts can betray him. Also wouldn’t mind if he kissed her on the mouth.
Vid would love to kiss the girl, but his brother is lost, he’s got hostile aliens on his tail, and the stench of betrayal all around him. Can he trust the woman who told him to trust no one?
Then a time quake hurls them to a nasty somewhere and some when…

Permanent link to this article: https://twfendley.com/brop-interview-pauline-baird-jones/