Welcome to this week’s Blog Ring of Power guest, Kristi Petersen Schoonover. Her Pushcart-nominated psychological horror novel Bad Apple has been called “deeply disturbing in the best way possible,” by SciFi Saturday Night. Her short fiction has appeared in Carpe Articulum, The Adirondack Review, Barbaric Yawp, The Illuminata, Morpheus Tales, New Witch Magazine, Toasted Cheese, The Smoking Poet, The Battered Suitcase, and a host of others, including several anthologies. Kristi is the recipient of three Norman Mailer Writers Colony Winter Residencies and is an editor for Read Short Fiction (www.readshortfiction.com). She lives in the Connecticut woods with her housemate, Charles, three cats–Poe, Mikey, and Kali–and her husband, paranormal investigator and occult specialist Nathan Schoonover of The Ghostman & Demon Hunter Show (www.ghostanddemon.com). She has a passion for ghost stories, marine life, and Tarot cards and still sleeps with the lights on.

Don’t miss the rest of Kristi’s interview at:

When do you write? Literally, whenever the mood strikes—when an idea for a short story hits me and it’s “ready to come out,” so to speak, I drop everything and get to work until it’s complete. I have never been able to get into the “write every day” mindset. It’s just never worked for me.

How much time per day do you spend on your writing? If I’m pounding out a piece, it can be as many as eight to ten hours a day until it’s finished. When I’m not actively writing fiction, it’s a good bet I’m writing something else—blog posts, letters, marketing pieces, revisions—or I’m doing some other project that doesn’t necessarily involve writing but is high on the creativity requirement scale. I tend to be a “start a project and go until it’s done” person, so it really does depend on what I’m working on.

What has been the most surprising reaction to something you’ve written? A decade ago I had an editor reject a piece who wrote that the reason she rejected it was because she was horrified that I’d suggest a seven-year-old boy would do something as awful as pull the legs off a spider. “Boys just don’t behave that way,” she wrote. I just thought that was such a strange reason to reject a piece, and then I was amused by it, and later, I felt bad for her. Either she had never spent any time around little boys (I had two brothers and not only did they both go through the bug-torture phase, you should’ve seen what they did to gypsy caterpillars), or, she was sadly disillusioned about her own kid (if, of course, she had one). Still, that rejection was the one that made me understand that the best kind of rejection to get, the one that is the most professional, is simply the one that just says “no thank you” and nothing more. That lesson helped me enormously when I edited The Pitkin Review for Goddard College and continues to help me as a co-editor at Read Short Fiction. So I guess I owe her something.

Other than your family, what has been your greatest source of support? Hands down, my friends. They pick me up when I’m down and party as hard as I do. From the half who are writers I get great critique, a shared passion for the craft and all of the wonderful activities that go along with that; from the half that aren’t, I get great feedback, encouragement, and support. That said, I have a few stand-out mentors: my high school freshman year Creative Writing teacher, Ron Olson, and my college junior/senior year creative writing and speculative fiction professor, Daniel Pearlman. I’m still in touch with Mr. Olson and I’m lucky enough to be in a critique group with Dan. If it weren’t for those two men—who pull no punches when it comes to criticism—I would not be writing today.

How do you deal with rejection and/or negative reviews? My usual reaction is “okay, cross that one off the list, move on”—I’ve been doing this for so many years I don’t feel anything about it anymore. Business is business. In the wake of a rejection I update my records and find some other places to send the work.

I’d be lying, however, if I said I was never bothered by a rejection. Sometimes, there’s that place I really wanted to get into, the magazine rejects it, and I’m disappointed at best, hurt at worst. When that happens, I pour a glass of wine, call a good writer friend, blow off the steam, let that person rebuild my confidence, and then it’s back to work. I’m usually over that in a matter of hours.

As far as dealing with negative reviews—yes, it can be hurtful. But I’ve always kept an article I once read in mind— “if you don’t have any negative reviews, your work isn’t spreading far enough.” So I try to look at it that way—it proves your work is being taken seriously, and that you really are a professional. 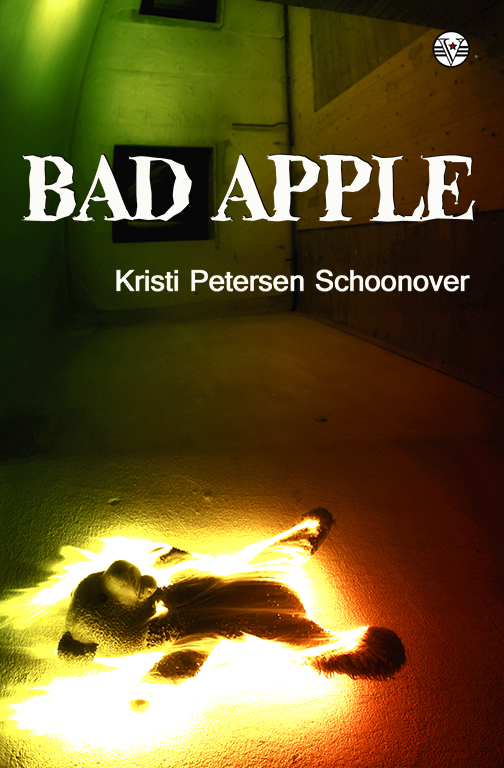 BAD APPLE:  After an unfortunate incident on a Maine apple orchard, precocious teen Scree is left with a father she’s not sure is hers, a never-ending list of chores and her flaky brother’s baby. In a noble move to save the child from an existence like her own, Scree flees to a glitzy resort teeming with young men just ripe for the picking. But even as life with baby becomes all she’d dreamed, Dali-esque visions begin to leach through the gold paint…

Fans of The Haunting of Hill House, The Lovely Bones, and Carrie shouldn’t miss Bad Apple–a dark, surreal ride that proves not all things in an orchard are safe to pick.

Permanent link to this article: https://twfendley.com/brop-interview-kristi-schoonover-petersen/