I’m an Underlord. Who knew? 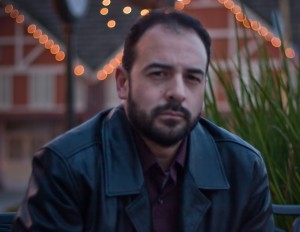 Today I’m very pleased to welcome James Garcia Jr. for the final part of his Blog Ring of Power interview. Don’t miss the rest of his interview at:

James Garcia Jr. was born in the Central California town of Hanford. He moved up the road to Kingsburg with his family as a child. After graduating KHS, he attended Reedley College where he met his wife. They, along with their teenage sons, still make their home in Kingsburg which is also the setting of James’ debut vampire novel. “Dance on Fire”, was published in 2010 and its sequel is scheduled for an early 2012 release. James is an Administrative Supervisor for Sun-Maid Growers of California.

BRoP: Tell us about your route to success – did you use an agent? How did you land your agent and/or publisher?

James: My route to success? Hmm? I will tell you that the first query that I ever sent out came back a home run! They wanted the whole book, sent a contract and I was in. The next day I found out the whole thing was a fraud and I had to get out of it. Thankfully I did, but it was disheartening to come from such a “high” to 18 months of wondering whether I might ever hear the word yes again. I did manage to find that publisher that did say yes, thankfully. The novel came out in 2010 and was a dream come true. Now I have found myself deciding to self-publish since my publisher closed up her business, but that’s okay because I know so much more that I did about the business and the business of writing now. I know some, but certainly not all.

BRoP: Why did you choose to go with a small/independent press?

James:I went with a small publisher because they were the first to say yes. I have now decided to go it alone because of the state of the industry now, and how it is so much easier to do so. There will be no more questions or lack of communication because I will be my own boss; however, that means that it is all on me to do the best job that I can, and to be as professional as I can. If I do a lousy job of writing, editing, etc., it will be on me and I’ll fail. Just because the avenue for being published is easier does not make the job of producing a quality book easier.

BRoP: What are the most important elements of good writing?

James: Good writing sucks a reader in and transports them away. That is what both the author and the reader want out of a book. Knowing every word in the Dictionary does not necessarily equate to being able to write well. We have all read books where it seems the author was just showing off and we stumbled trying to get transported to that destination. Whether the content is zombies, rewriting history by having presidents fight vampires, young wizards in training or two people from different backgrounds meeting and falling in love despite multiple obstacles, if the story is good, the reader will be sucked in. I mentioned not wanting to read Pat Conroy’s Beach Music. I fought that book, but in the first few pages it beat me and sucked my right in. Years later, I’m still there.

James: My advice for everyone, writer or not, is to chase your dreams. I have had a bit of a setback this summer, but I know it is only a slight delay. Dreams do come true. Thankfully, I finally realized in my late thirties the regret I was facing if I never tried. I especially love telling young people about my story. I want those young men and women to know that fairytales do exist. Never let anyone tell you that they don’t.

BRoP: What are your current/future projects?

James: I am very excited about my third book. It is a stand-alone novel about ghosts. I have always wanted to write a ghost story, but wanted one that was fresh and new to me, and not simply to tread tired ground. This one explores ghosts that haunt houses as well as the ghosts of the past that haunt each one of us. I’m also a bit of a romantic; so this one is more Paranormal than Horror and I finally get to pull on heartstrings. This one should see the light of day in early 2013.

James: I just want to thank everyone for the providing me an opportunity to share on their sites as well as all of the readers who took time out of their busy schedules to give an unknown guy a chance to meet them. Thank you all so very much.

BRoP: Thanks for taking the time to be with us for the past five days! It’s been great learning more about you.

BRoP: Where can readers find you?

DANCE ON FIRE — Each May, the Central California 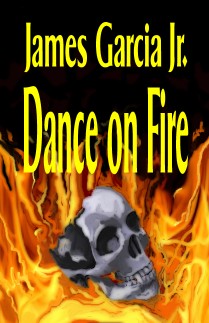 town of Kingsburg celebrates its Swedish heritage with the annual Swedish Festival: a weekend event where the town puts on its traditional dress, culminating with a dance around a Maypole on Friday, and a Swedish pancake breakfast and parade on Saturday. The town with a population of over 11,000 residents draws thousands more to the event. This year, two uninvited guests also converged upon the unsuspecting town.

Nathaniel is a vampire. He wandered into town, bothering no one; feeding upon stray cats and other vermin, wanting nothing more than to have a place to rest his head. Vincent is a second vampire, and the one responsible for making Nathaniel. He has been searching for his long lost “son” for well over two centuries. Vincent’s goal is to take Nathaniel home or kill him. Nathaniel has often wished for death, wondering why God ever allowed this punishment: to walk the earth undead and unable to be redeemed. Does God remember the little boy from Romania who watched his parents die, was raised by the murdering vampire, only to become one himself? What does God think of Nathaniel and could there yet be redemption for one outside of heaven?
Ten days before the start of the Swedish Festival the most tumultuous week in the history of Kingsburg has begun with two vampires leaving death and destruction in their wake. Kingsburg Police Detectives Mark Jackson and Michael Lopez, Barbara and the entire Lopez family find themselves drawn into something that threatens to destroy them all or leave them scarred forever.
In a marriage of the classic horror story and the Christian themes of good conquering evil and redemption, Dance on Fire is the account of characters being drawn into the fire and the supernatural forces around them watching as they burn.

Permanent link to this article: https://twfendley.com/brop-interview-james-garcia-jr/