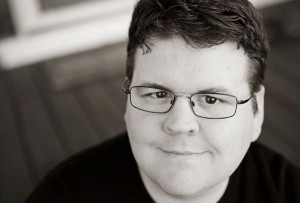 Welcome to this week’s Blog Ring of Power guest, George Sirois! He self-published his first novel, From Parts Unknown, in November 2002, and is now re-working it as a five-part eBook serial and paperback release. When he self-published his Young Adult/Science-Fiction novel Excelsior in July 2010, it was named “Top Pick” by Night Owl Reviews and a quarter-finalist in the 2011 Amazon Breakthrough Novel Award contest. George’s writing has also been seen on 411Mania.com and Booktrib.com as a featured columnist.

After living in New York City for most of his life, George and his wife and their two dogs now happily call St. Louis, MO, their home. In his spare time, George is an avid cinephile, a collector of film scores, a lifelong fan of the New York Giants, and enjoys West Coast Swing dancing.

Don’t miss the rest of his interview at:

How long have you been writing? – A better question would be, “How long have you been creating?” I started coming up with a group of characters in 1985 with some classmates in grade school. We would just spit out one character after another to create these two teams of heroes and villains. It was a lot of fun, and when I was in 6th grade and was in a different school, I kept adding more characters on my own and eventually started refining them and adding more detail.

When and why did you begin writing? – I started writing about my characters in 1990 for a very simple reason: I can’t draw very well. The original idea was to make a comic book about them, but since some level of artistic talent is required to make that happen, I shifted over to just prose. The idea was to make the definitive origin story of my characters and go through all the adventures that I had sketched out in comic book form for the past two years. Of course, their histories have completely changed since then, but this was the first one that I finished and it filled almost 200 hand-written loose-leaf pages.

Tell us about your early works—what was the first thing you ever wrote? – In 1988, my last year in Poughkeepsie, NY, before making the move to Richmond, VA, I had an idea for a short story and wrote this children’s book. It was about a couple of kids that found a strange time travel device that shot them hundreds of years into the future. There wasn’t much to it, but it was fun to write. And before that school year ended, I had written a Part 2 and 3 to the story, but Part 3 ended on a cliffhanger and I never got to finish the story. But in 1989, during my first year in Richmond, I refined the first story and submitted it to a young writers’ contest where it won First Place in my age group. I think that got everything started.

What genre do you write? – Excelsior was my first full-on Young Adult novel, but even though my main genre of choice was science-fiction, I enjoy writing stories for a younger audience. Most of the characters are adults – Matthew Peters was the first younger character I wrote about – but most of the comic book heroes we know and love are adults and are read by a younger audience.

What is your favorite theme/genre to write about? – I’ve always been a sucker for the “Hero’s Journey” template that Joseph Campbell introduced. When I first read “The Hero with a Thousand Faces” and thought about the different types of stories that are referenced, I realized that I gravitated toward them the most. So Excelsior would be my opportunity to tell my own “Hero’s Journey” type of story, and I couldn’t pass that up.

EXCELSIOR: Created by high school senior Matthew Peters, Excelsior – savior of faraway planet Denab IV – is becoming an Internet sensation as the main character of a popular online comic strip. But before Matthew can enjoy his burgeoning success, a beautiful older woman arrives at his school and tells him that not only is she from the planet Denab IV, but that Excelsior’s lifeforce lives within him.

Now, with Excelsior’s old enemies regaining strength, Matthew realizes he is the key to Earth’s survival and Denab IV’s salvation, and he has an opportunity that he never thought possible, to become his greatest creation. . .

Permanent link to this article: https://twfendley.com/brop-interview-george-sirois/