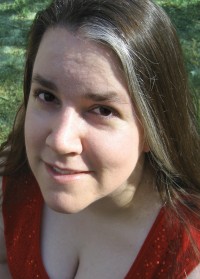 I’m very pleased to welcome this week’s Blog Ring of Power guest, Barbara Ann Wright. She writes fantasy and science fiction novels and short stories when not adding to her enormous book collection or ranting on her blog. Her short fiction has appeared twice in Crossed Genres Magazine and once made Tangent Online’s recommended reading list. She is a member of Broad Universe and the Outer Alliance and helped create Writer’s Ink in Houston. The Pyramid Waltz is her first novel.

She is married, has an army of pets, and lives in Texas. Her writing career can be boiled down to two points: when her mother bought her a typewriter in the sixth grade and when she took second place in the Isaac Asimov Award for Undergraduate Excellence in Science Fiction and Fantasy Writing in 2004. One gave her the means to write and the other gave her the confidence to keep going. Believing in oneself, in her opinion, is the most important thing a person can do.

Don’t miss the rest of her interview:

Barbara: I write anywhere the muse takes hold of me. I usually make notes with pen and paper so I can use my massive pen collection, then I work from my laptop. My only routine is that I try to write every day that I’m not mired in something mundane, like taking care of myself.

I love the creative synergy that comes from working with other people. I feed on their creativity like a big ol’ vampire. I’ve heard that I make a good writing buddy because I write for long stretches, making others feel guilty until they get some quality writing done. What can I say? I love to help.

Barbara: Most people who know me know that writing is very important to me. Thus, I don’t usually get interrupted when I’m in my groove. But I’ll always put family and friends first. I would definitely save them from a burning building at the same time I’m saving my laptop.

Barbara: I’ll never forget the first time a friend told me he’d stayed up all night because he had to finish my novel. That one blew me away. Hands down, one of the proudest moments of my writing life. I’ll also never forget the first time strangers came to my blog and liked it. My critique groups have usually been people I’ve known, so people I’ve never met liking something I wrote was quite a kick.

BRoP: Other than your family, what has been your greatest source of support?

Barbara: Online communities like Critters, Broad Universe, and the Outer Alliance. I’ve met some fabulous people through each, and I’ve made some friends that I’ll keep all my life. Each time I’ve gone to them seeking support, I’ve been overwhelmed by the warmth and affection they’ve shown me. I’ve also received tremendous support from my publisher, Bold Strokes Books. They’ve had a lot of experience calming first-time authors, and it shows in the number of times they’ve been willing to talk me off a ledge.

BRoP: How do you deal with rejection and/or negative reviews?

Barbara: Brush ’em off! I don’t keep rejection letters, never saw the point of it. I haven’t had a review yet, so hopefully, I’ll feel the same way about any negative ones. The one thing I’ll never ignore is feedback. The few times I’ve gotten actual feedback in a rejection letter (real feedback, not “it’s not for me”) I’ve taken a good hard look at what I’ve submitted and thought of ways I could change it. If I get negative reviews that point out ways in which I 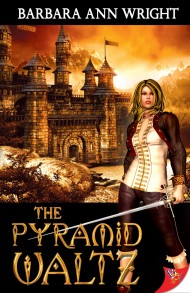 could honestly improve, you can bet that I’ll listen.

BRoP: What format is your book(s) available in (print, e-book, audio book, etc.)

Barbara: It is available in print and e-book.

THE PYRAMID WALTZ: To most, Princess Katya Nar Umbriel is a rogue and a layabout; she parties, she hunts and she breaks women’s hearts. But when the festival lights go down and the palace slumbers, Katya chases traitors to the crown and protects the kingdom’s greatest secret: the royal Umbriels are part Fiend. When Katya thwarts an attempt to expose the king’s monstrous side, she uncovers a plot to let the Fiends out to play.

Starbride has no interest in being a courtier. Ignoring her mother’s order to snare an influential spouse, she comes to court only to study law. But a flirtatious rake of a princess proves hard to resist, and Starbride is pulled into a world of secrets that leaves little room for honesty or love, a world neither woman may survive.

Permanent link to this article: https://twfendley.com/brop-interview-barbara-ann-wright/