Welcome to this week’s Blog Ring of Power guest, Jennie Bates Bozic. She’s a visual effects artist for film and television by day, and at night she dons her author cape and pens stories for the YA crowd. She loves a good fairy tale, especially if there’s a creepy twist, so that’s what she writes. She met her husband in the World of Warcraft and they live in Los Angeles with their cat. They spend their time playing video games, reading, hiking, sweeping up cat hair, and cursing the terrible traffic.

Tell us about your new book and when it is out? Where can people purchase it? I have two! DAMSELFLY is a futuristic retelling of Thumbelina. Sort of like Tinkerbell goes on the Bachelorette. It’s been available since Nov. 11 in print and ebook from all major online retailers.

SUGAR PLUM is a companion novelette (very short novel)  that will be permanently free as an ebook. It takes place at the same time as DAMSELFLY featuring different characters that will play a big role in the sequel. It can be read before or after DAMSELFLY.

Is there anything new, unusual, or interesting about your book? How is it different from other books on the same subject? There are some dystopian elements in my book, but it’s not a fight against a totalitarian government. Instead, at its heart, it’s about a girl who faces circumstances she cannot change in a significant way and has to decide who she will be. I thought a lot about how to work out Lina’s story and her involvement in deciding her own fate. A lot of YA heroines right now are very kickass (which is great!) but sometimes we can’t do much to actually change our environment. I felt it would be more realistic in her case to show how she grows in personal strength in that sort of situation and takes ownership of herself and her choices.

What was the hardest part of writing this book? The romance! Writing romance makes me so nervous because I personally don’t enjoy reading it unless it’s done very well. It was really important to me that the relationships felt authentic, especially since the setting is so removed from real life.

What was your favorite chapter (or part) to write and why? I loved writing the scene where Row and Lina team up to do some investigating. It’s creepy and a really fun reveal of a vital plot point (Well, fun from my point of view. Maybe not the reader’s!).

Tell us about your book’s cover – where did the design come from and what was the design process like? I’m a visual effects artist, so I decided to design my own cover. I wanted to portray Lina because–hello!– awesome wings! But I didn’t want to dictate how other people should see her in their minds, so I went with a silhouette. The web was a fun addition that I didn’t originally plan.

Please let us know where your readers can follow you: 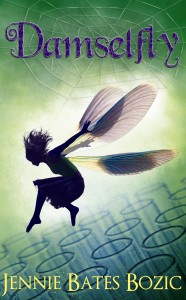 DAMSELFLY (DAMSELFLY #1): In 2065, the Lilliput Project created Lina – the first six-inch-tall winged girl – as the solution to a worldwide energy and food crisis. Isolated in a compound amidst the forests of Denmark, Lina has grown up aware of only one purpose: learn how to survive in a world filled with hawks, bumblebees, and loneliness. However, on the eve of her sixteenth birthday, she discovers that she’s not the only teenager her size. Six ‘Toms’ were created shortly after Lina, and now her creators need to prove to the world that tiny people are the next logical step in human evolution. In other words, they need to prove that reproduction is possible.

Um. No thanks. Lina’s already fallen in love with a boy she met online named Jack. Only he has no idea that thumbelina1847 could literally fit inside his heart.

When her creators threaten to hurt Jack unless she chooses a husband from among the ‘Toms’, Lina agrees to star in a reality TV series. Once the episodes begin to air, the secret of her size is out. Cut off from any contact with the outside world, Lina assumes Jack is no longer interested. After all, what guy would want to date a girl he can’t even kiss?

Slowly, very slowly, she befriends the six young men who see her as their only ticket to happiness. Perhaps she can make just one guy’s dream of love and companionship come true. But her creators have a few more twists in store for her that she never thought possible.

She’s not the only one playing to the cameras.

Permanent link to this article: https://twfendley.com/brop-inteview-jennie-bates-bozic/