Welcome to this week’s special guest, Terri Bruce! In addition to being the author of a fascinating new fiction series brought to you from the afterlife, Terri is the founder of The Blog Ring of Power (BRoP).

Today is also the first day of a new format on the BRoP – interviews will now be posted on Mondays and all five parts will be posted on the same day. We hope this makes it easier for you to access the whole interview.

TERRI BRUCE has been making up adventure stories for as long as she can remember and won her first writing award when she was twelve. Like Anne Shirley, she prefers to make people cry rather than laugh, but is happy if she can do either. She produces fantasy and adventure stories with a literary bent from a haunted house in New England where she lives with her husband and three cats. Her second novel, Thereafter (Afterlife #2), will be released May 1, 2014.

This is Part One of a five-part interview. Be sure to check out the other BRoP sites for the rest of the interview:

Tell us a little about yourself—how did you get started writing? What was the first thing you ever wrote? I’ve always written; in grade school, they had us write a story every year, which we then made into a book – we printed it neatly on nice paper, drew pictures to accompany the story, and then sewed it all together with a cardboard wrapped in wall paper for covers. I think that was my favorite thing we did all year and I still have those stories (thanks Mom for keeping them!). It wasn’t until 2001, however, that I really set out to write a novel “for real,” and that’s when I started working steadily toward becoming a professional author.

How many published works do you have? One work, published twice 🙂 (and a second book “oh-so-close” to having been published last May that will be coming out this May).

What genre do you write? I write science fiction and fantasy with a literary bent (kinda like The Time Traveler’s Wife, Cloud of Sparrows, or The Night Circus).

What is your favorite theme/genre to write about? I’m fascinated by a lot of things—the world is a source of endless wonder to me—and so I tend to hop around, exploring various subjects through my writing. I’ve explored identity and truth in my first (still unpublished) novel, Say It Three Times. In the Afterlife Series, I explore afterlife mythology, the nature of love and friendship, and learning to accept our own weaknesses. I have a science fantasy in the works that is about survival, identity, and dealing with mortality, and a historical fiction on the backburner that is about the Bread and Roses strike. So…yeah. There’s really not one common theme to my work. My stories are always character-driven and more toward the literary end of the spectrum, but beyond that, it’s hard to say there’s a particular theme or genre.

Outside of writing, what is the best part of being an author? The worst part? The best part—when someone tells me they liked my book! That’s my most favorite part. Whenever my review request is accepted by a blogger that I really admire—that still remains one of my favorite things. 🙂 Meeting so many awesome people who love books. Having so many people rooting for me during the dispute with my publisher and while I’ve been going through the growing pains of learning to self-publish. Becoming an author has helped me to see just how many kind and generous people there are in the world.

The worst part—writing! LOL! Dorothy Parker famously said, “I hate writing; I love having written,” and that’s me to a T. I also have found that I don’t really like managing the production process (interior layout, editing, etc.). I miss having a publisher do those things for me. Keeping on top of the administrative stuff—chasing down copyright infringement, making sure the book is loaded properly to all the retail sites, social reader sites, etc.

What format is your book(s) available in (print, e-book, audio book, etc.)? Both print (paperback) and all available ebook formats. And I hope that there will soon be an audio book edition!

Where can readers can stalk you: 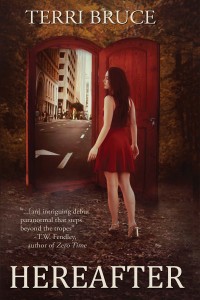 HEREAFTER (AFTERLIFE #1): Thirty-six-year-old Irene Dunphy didn’t plan on dying any time soon, but that’s exactly what happens when she makes the mistake of getting behind the wheel after a night bar-hopping with friends. She finds herself stranded on ea

rth as a ghost, where the food has no taste, the alcohol doesn’t get you drunk, and the sex…well, let’s just say “don’t bother.” To make matters worse, the only person who can see her—courtesy of a book he found in his school library—is a fourteen-year-old boy genius obsessed with the afterlife.

Unfortunately, what waits in the Great Beyond isn’t much better. Stuck between the boring life of a ghost in this world and the terrifying prospect of three-headed hell hounds, final judgment, and eternal torment in the next, Irene sets out to find a third option—preferably one that involves not being dead anymore. Can she wipe the slate clean and get a second chance before it’s too late?

Permanent link to this article: https://twfendley.com/brop-interview-terri-bruce/