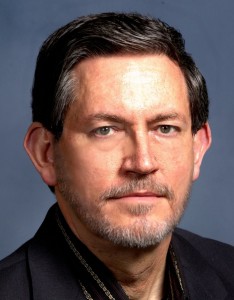 Welcome to Robert David MacNeil, this week’s featured author for the Blog Ring of Power. Don’t miss the rest of his interview:

Robert David MacNeil is an author, wine-lover, and investigator of things supernatural.  Over the last twenty years he’s traveled to 32 nations researching, writing, and teaching on angels, demons, and supernatural encounters.   His travels have taken him from the steppes of Mongolia to the jungles of Thailand, and from the Eskimo villages of Northwest Alaska to le fin del mundo, the “end of the world,” at the tip of South America.

Long a fan of science fiction and suspense thrillers, Robert also has a love for history–especially ancient Greece, Rome and medieval Europe.  He’s particularly fascinated with Patrick, Columba, and the ancient Celts of Ireland and Scotland.  The Celtic monks had a special relationship with the angels.  They also loved beer and invented whiskey.  The Irish really did save civilization!

Robert and his wife, Linda, live near Dallas, Texas.  He has authored five non-fiction books under a different pen-name. IONA PORTAL is his first novel.

BRoP: Where do you get your story ideas?

R.D.: I’ve done a lot of research on the supernatural, and have interviewed many people who claim to have had encounters with angels and demons.  (It’s really more common than most people think.)  Many of the events in IONA PORTAL are based on these reported encounters.

BRoP: Do you have a specific writing style?

R.D.: I want my style to be fast-moving and direct.  I try not to get bogged down in lots of detail.  I’d rather let the action move the book forward.  Most of my readers seem to appreciate this.  The most commonly recurring phrase in the reviews has been, “I couldn’t put it down!”

Many of the books I’ve read are so slow-moving, I find myself skimming page after page trying to find where the action picks up again.  If that’s the kind of book you like, you probably won’t like Iona Portal.

My favorite author is Clive Cussler.  I love his style.  It holds my attention from chapter to chapter and keeps me on the edge of my seat.  I’d like to think that my style is similar to Cussler’s.

BRoP: How do you deal with writer’s block?

R.D.: To me, writers’ block means I’m not seeing the next step clearly.  It sometimes means I need to let the project simmer a little longer, do some additional research, or spend more time getting to know my characters.

Writers’ block most often hits me when I’m not confident what my characters would do next.  I don’t know them well enough.

I keep a bio of each character, along with pictures of each culled from the internet.  Sometimes when I’m facing writers’ block, I’ll go back and further develop their bios.  This often brings a breakthrough, and I’m back to writing.

BRoP: How do you develop your plots and characters? Do you use any set formula?

R.D.: I begin with a general sense of where the book is going, but I don’t try to work out all the details in advance.

I like my books to be character driven.   I start with the characters.  With IONA PORTAL I wrote a biography of each major character, formed a mental picture of them, even scoured the internet to find photographs that matched that mental image.

These people became more than names on a page. I knew their strengths and weaknesses, their struggles and fears… even the sound of their voice. (Michael Fletcher sounds a lot like Sean Connery.)  I knew them so well, I’d be walking through an airport and see someone walking the other way and think… “She looks just like Lys Johnston!” In short, these characters became real people to me. I CARED what happened to them.

Stephen King once said, “I try to develop sympathy for my characters, then I turn the monsters loose!” That’s my next step.

Once I had the characters, I let the action start. IONA PORTAL begins with a gripping scene where our strong female lead, Lys Johsnton, finds herself driving a narrow mountain road in the middle of the night pursued by two strangers with blood-lust in their eyes.

I wrote the first version of that chapter with no idea where the story was going. Lys Johnston was in a dire situation, but I cared about her, and willed her to survive.

In the next scene, I added the next character. The characters began to interact. Then, as the story progressed, the direction of the book became clear. More characters were added, and “the plot thickened!” How would these people manage to survive and save their world from disaster?

BRoP: Are you a “plotter” or a “pantser” (do you plan/outline the story ahead of time or write “by the seat of your pants”)?

R.D.: A little bit of both.  I know what the book is about, and have a pretty good idea how it will end.  But I don’t try to work out all the details in advance.  My characters develop a mind of their own, and sometimes they surprise me.

BRoP: Do you use critique partners or beta readers? Why or why not?

R.D.: My wife is my greatest critique partner.  She also does some writing and has been encouraging from the start.

I also have a circle of friends at work, many of whom are writers and editors, who have strongly supported theIONA PORTAL project and graciously read and reread the various rewrites.  One of these readers, who is also an excellent editor, has plowed through every version of IONA PORTAL from the beginning.  She usually gets the manuscript back to me a few days later with a paper-clip on every page needing correction.  I owe her MANY boxes of paper-clips!

At end of first rewrite I found I was getting conflicting feedback.  Some readers liked an element in the story, while others disliked that same element.  I knew that I needed to get some consensus.

What I came up with was an IONA PORTAL “wine tasting.”  There’s a good deal of wine drinking in IONA PORTAL, so I got a bottle of each wine or spirit mentioned in the book.  I then invited 12 friends to the tasting, with the stipulation that they read the book and answer a few questions before they came.

At the tasting, I described each wine and explained why I thought the characters would have chosen that wine.   We stopped from time to time to compare answers to the questions I’d given them.  It was a lot of fun, and extremely helpful.  It let me see where the members of the group agreed and disagreed on certain issues.  It was one of the most helpful things I’ve done, and very enjoyable all around.  I’d definitely do that again. 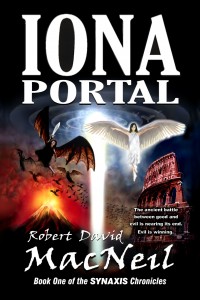 BRoP: How much time do you spend on research? What type of research do you do?

R.D.: I do a lot of research on the internet, but I also supplement it with travel.  I’ve been fascinated with the Island of Iona for years, but no amount of reading could take the place of going there.  So before writing IONA PORTAL, I traveled to Ireland and Scotland, spending several days on Iona.  I don’t think the book would have seemed “real” if I hadn’t.

In the second chapter of the book, Erin Vanderberg drives to Mount Kilauea on Hawaii’s Big Island, intending to end her life by jumping into the Halema’uma’u crater.  My question was, how can I realistically describe that scene?

So for my birthday, my wife took me to Hawaii.  (Frequent flyer miles are wonderful!)  We stayed at the Volcano House hotel, perched on the brink of the Kilauea caldera.  We got up early and drove out to the volcano overlook at 5 am.  We witnessed the hellish red glow emanating from the floor of the Halema’uma’u crater, and the sulpherous clouds of steam billowing skyward. Two things surprised us.  First was the bitterly cold wind–we didn’t expect “cold” in Hawaii.  The second was the deathly silence.  There was no life in the place.  We drove back to the hotel and warmed ourselves with steaming mugs of hot coffee, sitting before a huge stone fireplace that featured a cast-iron bust of Pele, the volcano goddess, instead of a mantle.

Of course, all of these details made it into IONA PORTAL and helped shape the events in the chapter.  They also gave it a ring of authenticity.  There’s no substitute for being there.

R.D.: IONA PORTAL is available in paperback and Kindle e-book at Amazon.com.  Amazon Prime members can read IONA PORTAL free on their Kindle

Permanent link to this article: https://twfendley.com/brop-interview-r-d-macneil/