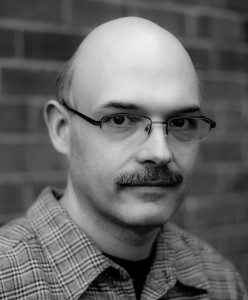 Welcome to Matthew Cox, this week’s Blog Ring of Power guest. Born in a little town known as South Amboy, NJ, in 1973, Matthew has been creating science fiction and fantasy worlds for most of his reasoning life. Somewhere between fifteen to eighteen of them spent developing the world in which Division Zero, Virtual Immortality, and The Awakened Series take place. He has several other projects in the works as well as a collaborative science fiction endeavor with author Tony Healey.

Matthew is also an avid gamer, a recovered WoW addict, Gamemaster for two custom systems (Chronicles of Eldrinaath [Fantasy] and Divergent Fates [Sci Fi], and a fan of anime, British humour (<- deliberate), and intellectual science fiction that questions the nature of reality, life, and what happens after it.

He is also fond of cats.

Awards include a Writers of the Future Honorable Mention for an excerpt of Prophet of the Badlands.

Where do you get your story ideas? Most of the time I’ll see something that will trigger a little seed of thought, which tumbles down the hills of my brain picking up other things along the way until a plot ball slams into the ground at the bottom. I’ve had about 20 years of worldbuilding to develop the setting for the Sci Fi books, as well as a Fantasy world I haven’t touched yet.

Some of my plots started off as ideas I put together to run as tabletop RPG sessions (Virtual Immortality was one such example). Caller 107 came to me as an eerily vivid dream, and I wrote it down as soon as I woke up.

Do you have a specific writing style? I will usually spend a week or three working on an outline. I’ll write down key events, key moments in the character’s development. Then rearrange these into a chapter outline, add more detail, sprinkle on some subplots and get everything in the order I want.

Once I have that chapter outline set up, I’ll migrate it from a spreadsheet into Word and start drafting. Once I’m in the drafting phase I just type until I finish from beginning to end. Once that’s done, I’ll let it sit for a few days and do edit pass 1. After that, I start looking for betas.

How do you deal with writer’s block? If I get it, I’ll get back to you. (Seriously, I haven’t had this issue yet.) The only thing I think might come close is getting started on something. I have a little habit that I like to do wherein the first word of a book (or short story) needs to be something meaningful to the character or the situation. I put a lot of thought into the first word, and I can sometimes stew over it for a few hours.

How do you develop your plots and characters? Do you use any set formula? No set formula. I just envision the world around them, the situation they’re going through, and try to construct a complete psyche for them. Within the framework of that artificial personality, I base the character’s reactions on how I think they would react.

Are you a “plotter” or a “pantser” (do you plan/outline the story ahead of time or write “by the seat of your pants”)? Plotter. When I first started trying to write, I’d always kind of wander off and get lost/stuck before getting too far into something. I decided to try outlining the key points and it worked. I think of it like setting pylons in a waterway between banks. The outline gives me something to bridge, in segments, from one side (beginning) to the other (end). Within each chapter, though, I tend to wing it a lot. My outlines have major points and events – and minor details often come out of nowhere while I’m writing.

For example the chapter “The Water Man” in Prophet of the Badlands came out of thin air while I was writing it. I hadn’t planned on it, but I got the scene in my head and it had to happen.

Do you use critique partners or beta readers? Why or why not? Absolutely. Both. One of the things a writer wants most is to be read. Both of these answer that need. In addition, crit partners provide valuable insight and advice and help a writer grow. Granted, one should not jump as soon as one person offers one bit of subjective criticism – but if more than one person has the same thing to say, it’s an opportunity to learn.

How much time do you spend on research? What type of research do you do? So far, my writing has been speculative. Most of my research is limited to my own notes of the world for those. For Caller 107 I made frequent use of mapquest for location references. Also, I got some help on the medical stuff from the sister of a close friend who is a RN (Hi, Donna) to keep the stuff accurate. 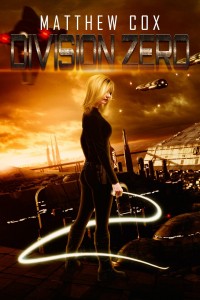 DIVISION ZERO: Most cops get to deal with living criminals, but Agent Kirsten Wren is not most cops.

A gifted psionic with a troubled past, Kirsten possesses a rare combination of abilities that give her a powerful weapon against spirits. In 2418, rampant violence and corporate warfare have left no shortage of angry wraiths in West City. Most exist as little more than fleeting shadows and eerie whispers in the darkness.

Kirsten is shunned by a society that does not understand psionics, feared by those who know what she can do, and alone in a city of millions. Every so often, when a wraith gathers enough strength to become a threat to the living, these same people rely on her to stop it.

Unexplained killings by human-like androids known as dolls leave the Division One police baffled, causing them to punt the case to Division Zero. Kirsten, along with her partner Dorian, wind up in the crosshairs of corporate assassins as they attempt to find out who – or what – is behind the random murders before more people die.

She tries to hold on to the belief that no one is beyond redemption as she pursues a killer desperate to claim at least one more innocent soul – that might just be hers.

Permanent link to this article: https://twfendley.com/brop-interview-matthew-cox/