Welcome to J. Kathleen Cheney, this week’s Blog Ring of Power guest. She is a former teacher and has taught mathematics ranging from 7th grade to Calculus, with a brief stint as a Gifted and Talented Specialist.

Her short fiction has been published in Jim Baen’s Universe, Writers of the Future, and Fantasy Magazine, among others, and her novella “Iron Shoes” was a 2010 Nebula Award Finalist.  Her novel, “The Golden City” came out from Penguin in 2013.  The sequel, “The Seat of Magic” will come out July, 2014.

When do you write?  I’m not much of a morning person when it comes to writing.  I can edit in the morning, but usually write new words in the afternoon and evening.

How much time per day do you spend on your writing?  Probably about 6 hours if I include editing.  I’m a slow writer.

What has been the most surprising reaction to something you’ve written?  I was once told that a short story was ‘sexually subversive’.  To this day, I’m not even sure what that meant.

Other than your family, what has been your greatest source of support?  I’m a member of several writing groups, and Carpe Libris and Codex have been lifesavers for me.

How do you deal with rejection and/or negative reviews?  Rejection is just part of the job for me.  Negative reviews?  Well, for the most part I’m not reading reviews any longer.  I found that I was obsessing over every negative thing people said (even in a glowing review, there’s usually one sentence devoted to ‘what could have been done better’) so I found that to keep my productivity up, I couldn’t allow them to distract me.  Unfortunately, this means that I don’t read that good reviews either, but I’ve decided that’s what I have to do. 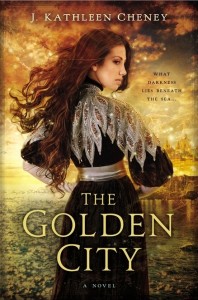 THE GOLDEN CITY: For two years, Oriana Paredes has been a spy among the social elite of the Golden City, reporting back to her people, the sereia, sea folk banned from the city’s shores….

When her employer and only confidante decides to elope, Oriana agrees to accompany her to Paris. But before they can depart, the two women are abducted and left to drown. Trapped beneath the waves, Oriana’s heritage allows her to survive while she is forced to watch her only friend die.

Vowing vengeance, Oriana crosses paths with Duilio Ferreira—a police consultant who has been investigating the disappearance of a string of servants from the city’s wealthiest homes. Duilio also has a secret: He is a seer and his gifts have led him to Oriana.

Bound by their secrets, not trusting each other completely yet having no choice but to work together, Oriana and Duilio must expose a twisted plot of magic so dark that it could cause the very fabric of history to come undone…. 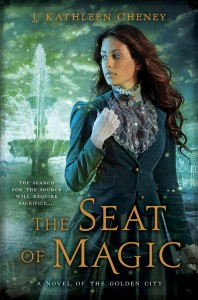 COMING JULY 2014 — Magical beings have been banned from the Golden City for decades, though many live there in secret. Now humans and nonhumans alike are in danger as evil stalks the streets, growing more powerful with every kill….

THE SEAT OF MAGIC: It’s been two weeks since Oriana Paredes was banished from the Golden City. Police consultant Duilio Ferreira, who himself has a talent he must keep secret, can’t escape the feeling that, though she’s supposedly returned home to her people, Oriana is in danger.

Adding to Duilio’s concerns is a string of recent murders in the city. Three victims have already been found, each without a mark upon her body. When a selkie under his brother’s protection goes missing, Duilio fears the killer is also targeting nonhuman prey.

To protect Oriana and uncover the truth, Duilio will have to risk revealing his own identity, put his trust in some unlikely allies, and consult a rare and malevolent text known as The Seat of Magic….

Permanent link to this article: https://twfendley.com/brop-interview-kathleen-cheney/