Welcome to this week’s Blog Ring of Power guest, Joshua Legg. He resides in San Antonio, Texas, with his dog, Ruby. He studies history and English, as well as about a dozen other subjects. His debut novel Etched in Soul and Skin was released this year by Musa Publishing.

Don’t miss the rest of his BRoP interview at:

Where do you get your story ideas? Anywhere and everywhere. Song lyrics have provided quite a few ideas. Other times, I’ll see a story and think about how it might play out in reverse, or the opposite. I also study a lot of history, be it in books or documentaries, and sometimes the questions they raise spark my imagination.  And, of course, there are just those ideas that come from absolutely nowhere and stick in my head until I write them down.

How do you deal with writer’s block? When I’m not writing or reading, I usually spend my free time playing video games of different genres and themes. Sometimes, something in their stories starts me thinking about stories of my own. Other times, I’ll just use the distraction as a way to cleanse my mind and let me get creative again. In rare cases, when doing something in a game when the story is dependent on your actions, or your strategic decisions affect the outcome, I like to imagine other outcomes and sometimes come up with entirely new ideas.

How do you develop your plots and characters? Do you use any set formula? Characters and plots develop organically in my notes and stories. If I come up with a character first, I’ll try to think of the circumstances and settings that would have realistically created someone like that. If I imagine a setting or situation, I’ll try to think of what kind of people would build or live like that.

I don’t have a formula, but I do try to never think of any story element in a vacuum. Just like in the real world, everything is connected in one way or another, so I try to stay mindful of the ‘wider world’ when creating things or people. Take for example, Adanna’s best friend, Kwee. From the beginning, I imagined her to not have magic powers and physically powerful in contrast to the thin and short Adanna. But as I developed the character, I realized the source of her headstrong attitude had to come from more than her simple strength. She is actually ashamed of her inability to throw fire around or do the amazing things almost everyone else in the tribe can do. She goes overboard with her physicality to just try and make up for what she sees as a major handicap. This never came up in the narrative, but it was something that was always on my mind when I wrote scenes with her.

Are you a “plotter” or a “pantser” (do you plan/outline the story ahead of time or write “by the seat of your pants”)? Something in the middle, I’d wager. I always start with a solid foundation of notes, ideas and even a loose outline of major story events, but I don’t meticulously plan every detail of the manuscript before I write it. I like to keep things very organic, and often times I find myself deviating from the rough outline as the first draft develops. In the case of “Etched”, I had to discard the outline entirely as the story moved in a direction I had never considered.

How much time do you spend on research? What type of research do you do? It depends on what I’m writing about, honestly. For “Etched”, I spent hours researching various Native American tribes and other nomadic groups in the world to make Adanna’s world as authentic as possible. Even though their society is different because they can use magic, and the reason they migrate is completely different from any historically documented group, it was essential to look into the lives of real nomadic peoples, otherwise the writing might have been so unbelievable, the reader would have been unable to connect with it.

However, as an interesting anecdote, the flying city of Shuran was originally going to fly on mechanical power alone. But a few seconds of number crunching and googling made me realize how impossible that would be, even for a fantastic steampunk city made of brass. And thus I came up with the necessity of magic in keeping it aloft and the energy crisis the city faced. 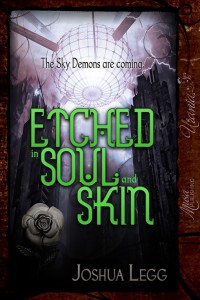 ETCHED IN SOUL AND SKIN: The Sky Demons have hunted Adanna’s tribe for centuries, kidnapping people in vicious nighttime raids and disappearing without a trace. Her life has been one of deprivation and loss, always striving to keep one step ahead of relentless attackers.

Erik is the newest soldier in a secret military, one dedicated to keeping his steam-powered city in the air. Only a select few know the dark secret of his flying home. It’s not their technology that keeps it aloft, but the magic that flows in the veins of the people who live below them. He has been trained for one purpose: to hunt and retrieve human beings.

Captured and almost turned into a living battery, Adanna is rescued by the very man who imprisoned her. In her, he sees a chance at redemption. In him, she sees a chance to escape. And maybe get a little revenge for the years of terror the ‘sky demons’ have inflicted on her.

Permanent link to this article: https://twfendley.com/brop-interview-joshua-legg/