Welcome to Danielle Ackley-McPhail, a fellow Broad Universe member and this week’s Blog Ring of Power guest.  Don’t miss the rest of her interview on:

g author Danielle Ackley-McPhail has worked both sides of the publishing industry for over seventeen years. Her works include the urban fantasies, Yesterday’s Dreams, Tomorrow’s Memories, the upcoming Today’s Promise, and The Halfling’s Court, and the writers guide, The Literary Handyman. She edits the Bad-Ass Faeries anthologies and Dragon’s Lure, and has contributed to numerous other anthologies.

She is a member of the New Jersey Authors Network and Broad Universe, a writer’s organization focusing on promoting the works of women authors in the speculative genres. She can be found on LiveJournal (damcphail, lit_handyman), Facebook (Danielle Ackley-McPhail), and Twitter (DMcPhail). Learn more at www.sidhenadaire.com.

BRoP: Tell us about your new book and when it is out? Where can people purchase it? 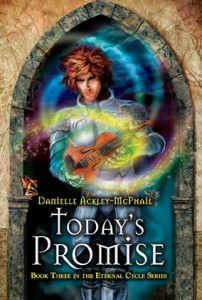 Danielle: Today’s Promise is the final book in the Eternal Cycle Series. The other two books, in respective order, are Yesterday’s Dreams and Tomorrow’s Memories. These are urban fantasy novels based on Irish mythology. Basically Irish elves in New York City. The main character, Kara O’Keefe has always had to be responsible, but that isn’t the same thing as being an adult. These novels lead her through a magical journey of self-discovery…literally. In the final book she has come to a tentative peace with who, and what, she is, but is frustrated with the world not letting her step up and do what needs to be done to safeguard those she cares about from ultimate evil. She takes a stand and faces the threats everyone wants to protect her from. In both her eyes and those of the people around her, she achieves adulthood, whether they are particularly pleased about it or not. This is both coming of age and good versus evil with a Celtic twist, bringing to light all the lovely aspects of their mythology most of us have never had a chance to hear about. It is scheduled to release the end of May in time to be launched at Balticon (www.balticon.org) a long-running science fiction convention held in the Baltimore area over Memorial Day weekend. It will be available in print and ebook from the publisher and all the on-line booksellers and select brick-and-mortar stores, either stocked or special order.

BRoP: Is there anything new, unusual, or interesting about your book? How is it different from other books on the same subject?

Danielle:  I like to think I’ve done some interesting things with the representation of Tír na nÓg—the Land of Youth—where the Sidhe live. Where I could I drew upon the actual myth or extrapolated from the details that were there, but some things I had to take beyond the “known”. See the ancient Irish had a mostly oral tradition so many details have been lost. One thing that I adapted was the Irish belief regarding reincarnation where you come back as your decedents. I use that belief to support the pop culture belief that elves rarely have children. Suppose that was so…why would that be? Well…because someone has to die for a child to be born. Related to that I have developed a ceremony that appears in Today’s Promise. It is called the Welcoming. Think of it as a magical equivalent of an Irish wake, only where the literal memories of a person’s life are shared. As each memory is viewed by those gathered it is cleansed from the soul. Once the soul has been completely cleansed the personality is set free and the soul is then able to return as a new person.

BRoP: What was the hardest part of writing this book?

Danielle: The hardest part? Getting back into the universe so I could finish the series. The first book, Yesterday’s Dreams, was completed in 1997, the second book, Tomorrow’s Memories, was finished in 2003. Part of the third book, Today’s Promise, was written at the same time as book two, but not much of it. And then…I got sidetracked. Many, many projects came up; novels, anthologies, etc…All of a sudden it was 2011…the tenth anniversary of the first publication of Yesterday’s Dreams, and the series wasn’t done yet. Not only did I lose touch with the universe, forgetting where I was going with things, but I also learned a LOT over those ten years, my writing skills changed, my storytelling changed. That was a hard thing to overcome, but once I did I just couldn’t stop. Three months later I had a book and I can’t wait until the world sees it, including all those fans of mine that come up at each event asking when they can get their hands on book three!

BRoP: What was your favorite chapter (or part) to write and why?

Danielle: I will always have a soft spot for the prelude of Today’s Promise. My preludes are always a bit of history that are not closely related to the events of the plot, but have relevance to the overall story. Mostly they are pretty much a bonus short story. This one is mostly from the perspective of my main character’s grandfather, whom we’ve mostly seen only in flashbacks and memories until now. Not only that, but we get to experience a very magical event in Kara’s life.

BRoP: Tell us about your book’s cover – where did the design come from and what was the design process like?

Danielle:  Oooh…I LOVE my book covers for this series. First off I have to give praise where it is due. I worked with the wonderful artistry team of L.W. Perkins and Christina Yoder (www.artdragon.net), two very gifted artists who excel at putting image to imagery. The final cover in this series is extra special because the character featured is Beag Scath, a relatively minor character in the first two books, but much beloved by many of my fans. He is a

sprite who has linked himself with my primary Sidhe character, Maggie McCormick. From the very beginning he has been the comic relief of the series, and he is quite good at it. An endearing character, he can be quite impish, but also fierce, when needed. In Today’s Promise he gets to be larger than life and quite bad-ass. We see a depth of him that has never before been seen, though I did hint a time or two. The cover of the book depicts his time to shine, where he armors himself and sets out to rescue someone very important to him. It took a couple of tries to get precisely what we were after, but only a couple. One pose change and then some color adjustments and then the ladies had pretty much nailed it. I could not be happier with this cover.

Danielle: Both print and ebook.

Permanent link to this article: https://twfendley.com/brop-interview-danielle-ackley-mcphail/