Guest interview on Dames of Dialogue!

Today I’m pleased to welcome ALMA ALEXANDER, author of SECRETS OF JIN-SHEI, who agreed to chat with the Blog Ring of Power (BRoP) about her two new works, MIDNIGHT AT SPANISH GARDENS (Sky Warrior Books) and RIVER (Dark Quest Books).

This is Part 2 of our BRoP interviews, so be sure to visit the other sites to learn more about this amazing author. 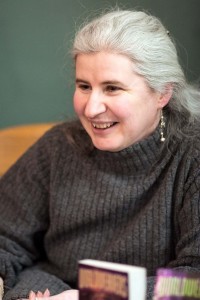 Alma Alexander was born in Yugoslavia, grew up in Africa, and went to school in Wales. She has lived in several countries on four continents, and is quite comfortable in the new continent of cyberspace. She was living in New Zealand when she met a man on an Internet bulletin board for writers, married him and moved to America. She now lives with her husband and two cats in the Pacific Northwest, in the city of Bellingham (directions to her home include the phrase “Aim for Canada and just before you get there, turn right”).

Alma: I started out the old fashioned way, pen and paper, and for the longest time I had the honorable badge of the writer – the ink-stained callus on the middle finger of my right hand. I produced reams of words in this wise, pen and paper, just me and the page. But those days are long gone, as is the callus itself. I miss it sometimes, it was so much something that identified me to the world as the thing that I am — a writer.

These days, I sit and stare at a screen, and touch-type. I can actually type quite fast although I have never learned professional “touch-typing,”  I can type almost as fast as I think, which means that these days I THINK my words onto the screen. And with computer, there’s the ease of simply changing my mind or shifting a scene somewhere else without having to retype a ream of work to do so – how did novels EVER get written before the computer age?  How did I ever write one? I cannot conceive of not doing that today.

I generally work at home, in my own office, but I am quite capable of tuning out the world when I need to. I’ve written on planes and on trains, in hotel lobbies waiting for cabs, anywhere, everywhere, when I needed to. And no, other than having coffee on tap at all times I do not do “routine” well.

Alma: There are other aspects to life…? [grin] There are things that do take up time. One has to sleep, to eat, to do laundry, to clean cat litter boxes (this is why writers have cats; they keep us humble. A cat has no regard for inspiration;  when it wants something, it wants it now or there Will Be Consequences. You quickly learn to make your muse aware that a cat’s needs preempt other things…) One needs to commune with other human beings in order to stay one. It is very easy to just turn into a hermit. It isn’t an accident that you hear of writers who turned into recluses – sometimes you need to practice the art of talking to somebody else, in real time, verbally, just so that you know that you actually still belong to the great human race out there. If you’re married or partnered, particularly if you have kids, there are family responsibilities that come with that territory. How do you balance it all? There is no recipe that fits all. Every single writer finds that balance by themselves.

BRoP: When do you write? How much time per day do you spend on your writing?

Alma: Whenever I can, and when I can’t,  I often rehearse things inside my mind until such time as I can write them down. Sometimes I dream scenes, chapters, entire stories – this counts as ‘writing’ too. And I don’t ‘time’ myself. I don’t obsess if I don’t meet an arbitrary ‘quota’ of words written or hours spent at it – nor do I crow or gloat if I overrun those quotas (and both have happened). Sometimes I need the down time to think things through – and this too counts as writing, just not actual physical stringing of words together on a page or screen. A writer tends to be thinking about a work in progress even when not actually physically engaged with it. This means that writers are sometimes scatterbrained and distracted. This happens when you try to live in several parallel worlds at once.

Alma: There’s a huge range. It’s been said that if nobody absolutely abjectly hates you, you just aren’t being read by enough people – but manifestations of such things still kind of hit you between the eyes when they happen. One of the best examples of fanmail was from a foreign reader who said that her favorite writer used to be Ken Follett. “Now,” she said, “it’s you.” That was it, the extent of the email. But those few words… take quite a bit of living up to.

BRoP: What is the strongest criticism you’ve ever received as an author? The best compliment?

Alma: To be honest, I am not certain about the criticism. I can think of certain pieces of mail, but they weren’t precisely criticism – they were more along the lines of hating something I’d done, with no critical backup, just visceral stuff – and these aren’t things that I kept or dwelled on at all. One learns how do shrug such stuff off, or else it piles on like barnacles and shreds you like those would, over time, devour a ship.

Compliments…? Those you remember. I recall one woman who bought a copy of THE SECRETS OF JIN-SHEI and had me sign it for her adopted Chinese daughter so that she could read about “her heritage,” although the book is a fantasy only based on Imperial China and not remotely historically perfect. She said that she looked forward to giving that book to her daughter when she was “old enough”… perhaps fifteen or so. I asked how old the child was now. The mother said, “Five.” I wept because of the pure and burning faith that had been placed in me. This woman thought enough of this book – this book I had written – that she was willing to buy a copy of it when her child was a toddler in order for it to be held in treasured trust for when the girl was old enough to understand. There is little to touch this.

BRoP: How do you deal with rejection and/or negative reviews?

Alma: Well, I certainly don’t argue with the reviewers, which plenty of authors have done to their detriment. The way I look at it is that there are as many kinds of readers as there are writers, thank God. If somebody didn’t connect with my book, that isn’t the fault of the book, its writer, or even the reader. It’s just a disconnect, and there isn’t anything anybody can do about that. The best thing to do is to take a moment to wish the reader better luck next time, and to hope that the book’s NEXT reader is more in tune with it. And it’s true in literature that the thing that one person loves is something that the next person will loathe and there is no predicting who will do which. I’ve met just as many people to whom the very name “Twilight” is anathema as I have who thought that it was merely okay/filled a marketing niche that seemed to need filling/was fabulous. Well, fewer of that last, but you know what I mean. A negative review is just one person’s opinion, after all, and if I get one which is actually supported by actual evidence as to WHY the reviewer hated it – well, I will take a look at those reasons and consider whether I think they are valid. The mere hate-ons – the “your book sucks” responses – those are something that no writer will or should take on as a burden. The reader brings, inevitably, their own baggage to any story, and this is something you as the writer have absolutely zero control over. There is little point in obsessing about it. That said, anyone who reads my books and LIKES them, I would LOVE to hear from you, and if you feel like posting good reviews – on your blogs, on Amazon, wherever – that is known as Word of Mouth, and it is a treasure beyond price. So I do encourage you to spread the POSITIVE energy around…

Alma: Yes {grin]  As in, yes, most of the above. E-books are available both on Smashwords and on Amazon (and on B&N, for that matter, some of them); print books are available via Amazon or through ordering them via your friendly local indie bookstore. Contact me directly  if you want a signed bookplate for your copy of anything, or you want to buy a signed copy of some of the out-of-print first edition hardcovers of a selection of books, some of which I still have on hand.

Other: 30th of every month: www.StorytellersUnplugged.com

MIDNIGHT AT SPANISH GARDENS: On the eve of the end of the world, 20 December 2012, five friends meet in Spanish Gardens, the cafe where they had celebrated their college graduation 20 years before. Over Irish coffees, they reminisce – and reveal long-held and disturbing secrets. Each friend in turn is given a curious set of instructions by an enigmatic bartender named Ariel: “Your life is filled with crossroads and you are free to choose one road or another at any time. Stepping through this door takes away all choices except two — the choice to live a different life, or return to this one….” Each in turn passes through the portal and are faced with new lives and challenges. Their decisions show a new life — or something far worse. At the end of the world, it’s a chance for redemption, or a chance to learn something about themselves.

RIVER: It begins. Somewhere. An insignificant trickle of water. And it changes. And it grows up, and gathers a history, and finds its way into atlases and maps, until it finally reaches the sea, and vanishes into its vastness. You might think it of no importance. That it does not matter. But you follow where it leads… Rivers have always been very important to humankind. They’ve been explored. They’ve been navigated. They’ve been called gods. They’ve been blessed and cursed and venerated and used and enjoyed and exploited and polluted since the beginning of recorded history. They’ve been sung about and dreamed about and followed on epic journeys of discovery. They capitals of empires have risen on the banks of rivers – and so have a thousand fishing villages, and river landings, and water mills. There is only one River. Really. And it’s all of them. Every river is dfferent – and yet they’re all the same, vast and full of life and death and mystery and history and adventure and quiet dreams. Full of life. Full of mystery. Full of stories. Stories by: Mary Victoria, Tiffany Trent,Jay Lake, Deb Taylor, Keffy R.M. Kehrli, Jacey Bedford, Joshua Palmatier, Brenda Cooper, Seanan McGuire,Ada Milenkovic Brown, Nisi Shawl, Joyce Reynolds-Ward.

Permanent link to this article: https://twfendley.com/brop-interview-alma-alexander/